Shortly after HTL was launched on 11 May 2020, I had to remove some headphones from the test results because I was no longer confident that their frequency responses were correct. In a Latest entry outlining this, dated 14 May, I promised HTL readers a complete explanation of the issue as soon as it became clear what it was. What I didn't suppose was that it would take over five months to pin down the source of the problem. But I now have. So here, as promised, is the low-down on what went wrong – 'low' being appropriate because that is how I've often felt while the issue dragged on.

The event that triggered the removal of measurements for the AKG K371, Audeze LCD-1, Audio-Technica ATH-AWKT Kokutan, Dan Clark Audio Aeon 2 Open, Mysphere 3.2 and T+A Solitaire P was a LinkedIn message from Konstantin Davy, a self-confessed 'headphone nerd' who works at USound GmbH in Austria. He alerted me to the fact that, while once his and my response measurements had aligned closely (he uses similar artificial ear hardware), more recently they had begun to diverge markedly in the treble. Here are some of the graphs he sent me as illustration:

While our HIFIMAN Sundara and HIFIMAN Susvara results are in good agreement, the AKG K371, Audeze LCD-1, Dan Clark Audio Aeon 2 Open and Mysphere 3.2 responses are markedly different in the treble (although bear in mind that the last model has adjustable capsules, making it unlikely that the two responses were measured in equivalent alignments).

I thanked Konstantin for alerting me to this and immediately withdrew measurements for the six headphones I've listed. I also informed Hi-Fi News that I believed the measurements I'd supplied for these headphones to be unreliable, recommending that they be removed from/not be published on HFN's web site (advice which was not heeded in full). I also informed, and apologised to, all the manufacturers involved or their UK distributor.

My initial suspicion was that there must be a problem with the ear simulator in my test setup, as this is the only component which is adjustable and has to be calibrated. I remembered an incident in which I dropped the artificial head in autumn 2019, and supposed that that was responsible, the more so as that was after I'd measured the Sundara and Susvara and before the K371, LCD-1, Aeon 2 Open and 3.2 tests. So I returned the ear simulator to GRAS in Denmark for recalibration. But when it was returned, the problem was still there. When I re-measured the Audeze LCD-1 – which became my touchstone in this affair because of the marked 6kHz response suckout I was seeing – the treble issue stubbornly remained.

I checked all my measurement electronics – always an unlikely source of the problem – and everything was fine. I double-checked the ear simulator by re-measuring some insert headphones (a process which doesn't entail using the artificial pinnae) – and the results accorded well with previous measurements. Here was something puzzling, though: I found that if I used my old, standard pinnae (which I'd replaced with the new anthropometric pinnae) the results were fine. This suggested a problem with the new pinnae, but how could that possibly be? Especially as both ears – left and right – were affected?

Actually, I'd noted treble disparities between old and new pinnae after the latter arrived in mid-2018, and took the subject up with GRAS early in 2019. It responded by performing its own comparison measurements on two headphones (one circumaural and one insert) and generating an engineering report, which you can download here. This also showed treble differences between the two pinnae, but of a much smaller order than I'd obtained when measuring the Focal Elegia. In retrospect, I should have looked harder at this point for an explanation, but instead I accepted the status quo. That was a mistake, although I did delay using the new pinnae, as best I remember, until later in 2019.

Once I'd eliminated every possible source of the problem other than, apparently, the anthropometric pinnae, I again approached GRAS in autumn 2020. I was asked, in response, to send over some headphones for testing there on equivalent hardware to mine, so that we could directly compare results. I supplied samples of the AKG K240 and, yes, Audeze LCD-1, and, when the results were in, GRAS's measurements indeed differed markedly from mine at treble frequencies. GRAS then suggested sending me a demo sample of its 43AG ear and cheek simulator, which is essentially what I use (although my components are mounted in an MDF 'head' whereas the 43AG is used on a desk, with the pinna pointing upwards). The idea was to see if substiututing any of GRAS's components for mine would bring our measurements into alignment.

In the event, the 43AG was never fully unpacked because I quickly spotted that my cheek plate – to which the artificial pinna mounts at the front and the ear simulator at the rear – was different to GRAS's in a key respect: the central hole, where the pinna and ear simulator meet, was of different diameter. Not by much – my vernier caliper recorded 18.3mm diameter for my plate and 20mm for GRAS's – but that was enough, with my cheek plate, to prevent the back of the anthropometric pinnae mating properly with front face of the ear simulator. 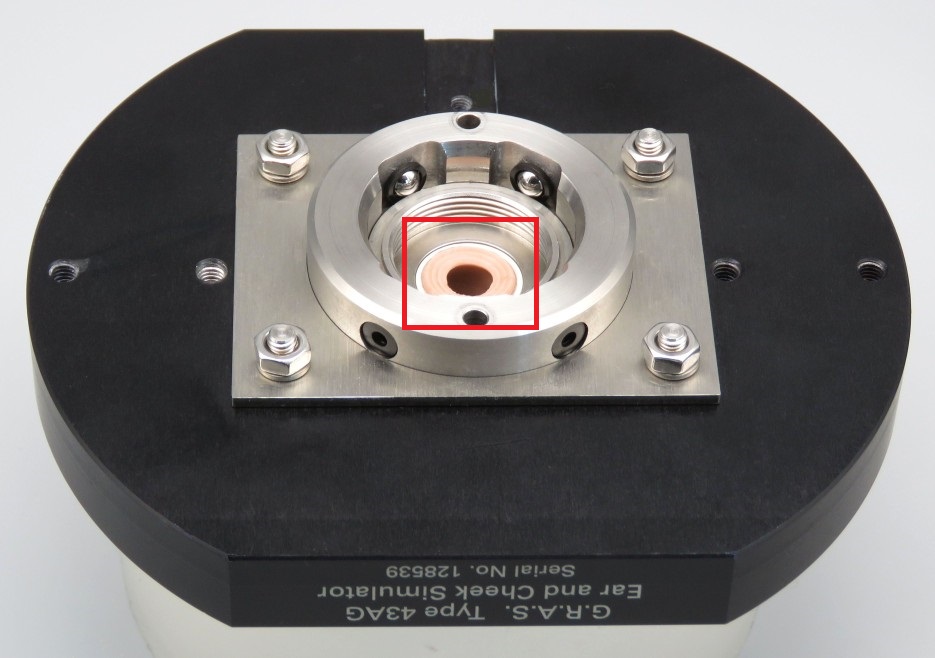 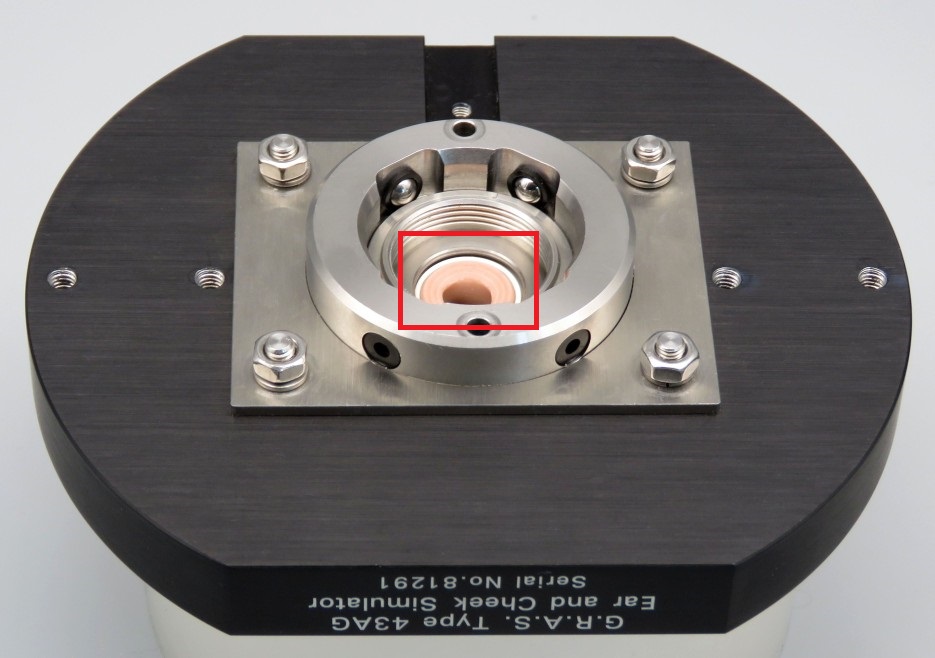 Based on measurements taken from both cheek plates, the CAD drawing below compares the mating of the pinna (its hard plastic back plate shown in grey, and pliable silicone rubber pinna mating face in yellow) with the cross-section of the cheek plate (in black) for my plate (left) and the GRAS plate (right). In the first case, the pinna back plate is spaced from the cheek plate by 1.3mm. 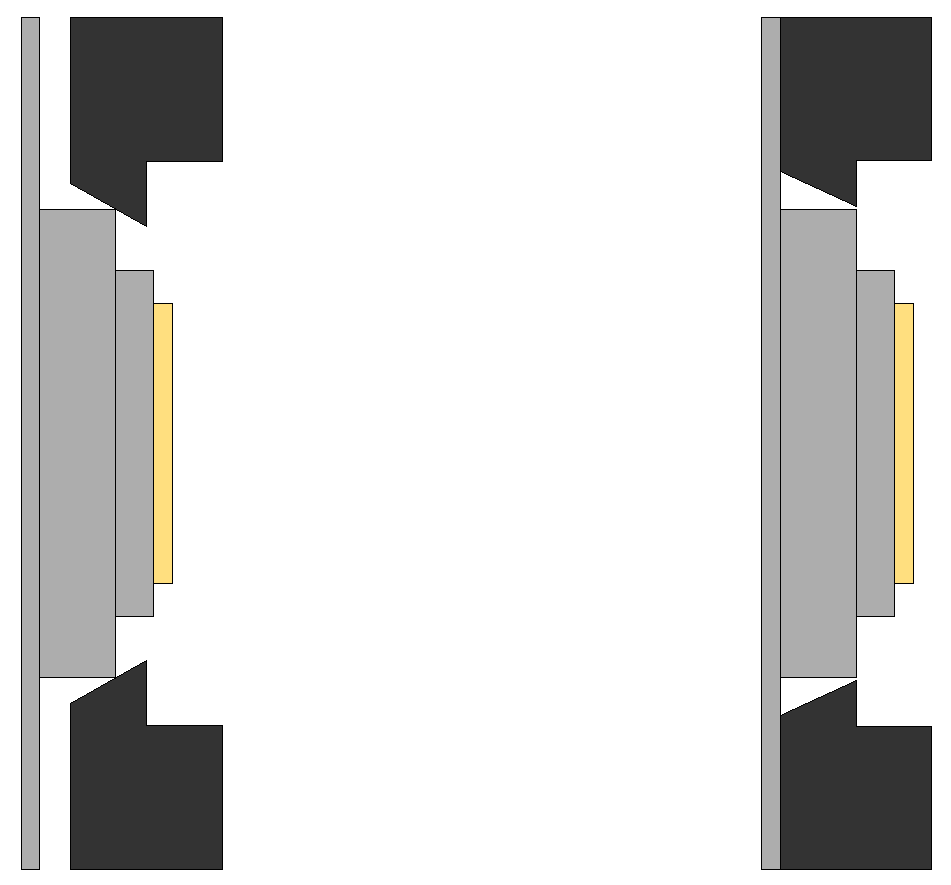 Comparison of pinna mating with the two cheek plates

That gap, small as it is, was responsible for the treble loss. As soon as I tried the GRAS cheek plate for measuring the LCD-1 – first fitted with GRAS's pinna and ear simulator, and then with mine – it was clear that the treble anomaly had disappeared, and that the correspondence of the two measurements was very good, as shown in the graph below. (Clicking on the graph will open it, enlarged, in a new browser tab.) 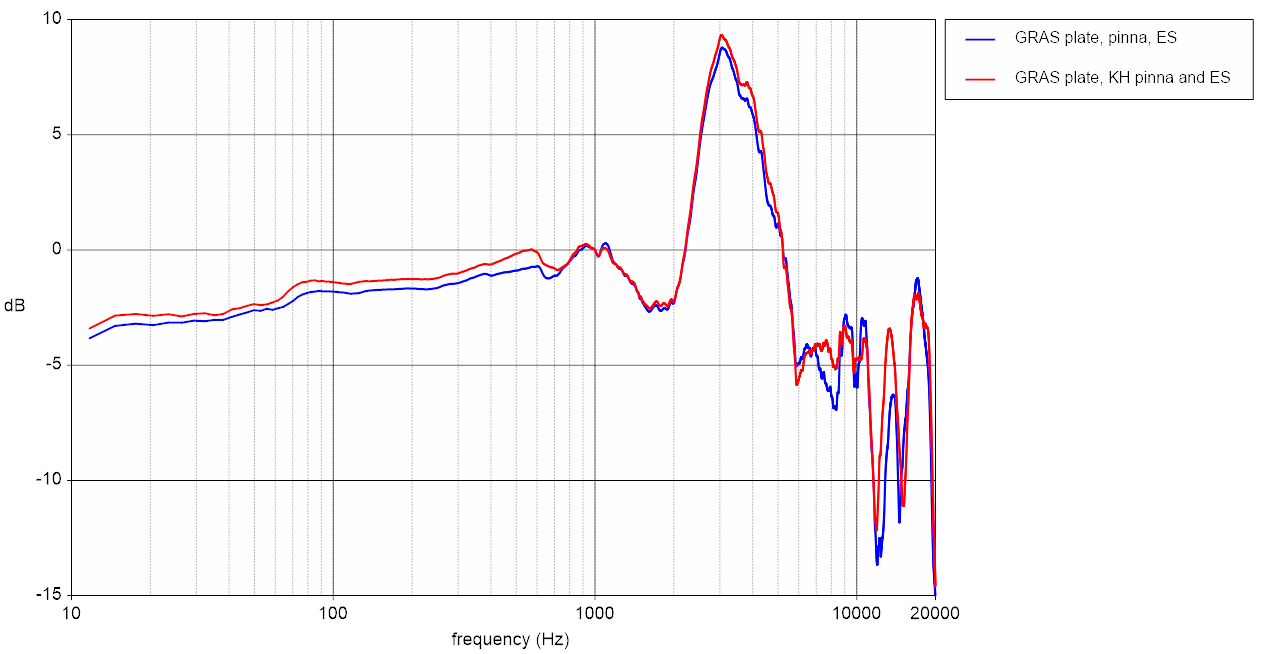 How did this happen? How did I come to have incompatible pinnae and cheek plate? The obvious answer is that there was a design change to the cheek plate some time after I bought mine in May 2007. But I am awaiting an explanation from GRAS to confirm that. The alternative is that my plate was incorrectly machined, but that seems unlikely. I am relieved that the problem has at last been diagnosed and corrected – the GRAS cheek plate remains here and mine is being returned with the demo 43AG. I am also grateful for GRAS's assistance in that process. But I clearly shouldn't have spent GBP1600 on the pinna upgrade to be left with an artificial ear with incorrect fit and function.

Now that the situation is resolved, I have once again looked closely at all the measurement results on HTL which might have been affected by this issue, comparing frequency responses, where possible, with those published elsewhere. I am confident that the results on view are representative.

As I still have review samples of the AKG K371 and Audeze LCD-1, I will re-measure these and revive their results pages. This may not be possible with the other four models whose results I pulled in May, as it depends on cooperation of the distributors.