Much of the last 60-plus years of loudspeaker development effort has been devoted to understanding and controlling resonances, both within the diaphragms of drive units and within the structure that supports the drivers, which more often than not is an enclosure. Despite this, relatively little published research exists regarding the audibility of resonances. What does exist is mostly quite old, often devoted to low frequency room resonances, and deals with the audibility of single resonances only. Vanishingly little has been published about headphone resonances in particular, but there is evidence [1] that, because room acoustic effects are suppressed, audibility thresholds are lower with headphones than they are with loudspeakers. So headphone resonances are probably more readily audible.

It's odd to reflect that the tools deployed to identify loudspeaker resonance – particularly cumulative spectral decay (CSD) plots – have only quite recently been applied to headphones. This despite the fact that most headphones use full-range drive units and often have plastic diaphragms, which are inevitably prone to breakup resonance because they aren't notably stiff. It may have been assumed, wrongly, that resonances within the ear itself make investigation of headphone resonance difficult, but nothing could be further from the truth. The human ear's inherent resonances are relatively few, mostly well-damped (see Footnote 1) and – in the case of pinna resonances – not excited strongly by sound impinging from the side of the head (as with headphones). So the CSD 'waterfall' of a headphone with good resonance control is remarkably clean (ie, free of ridges indicating resonance), as the example below – obtained from the Sennheiser HD 800 S – confirms:

If all headphones performed this well, resonance would barely be an issue. But most headphones do not, and the renaissance of isodynamic (planar magnetic) types has presented a new phenomenon: headphones which have multiple, closely-spaced, high-Q diaphragm resonances. The question is: are these resonances audible? Currently there is no means whereby this question can be easily and confidently answered.

One of the earliest and most pertinent investigations into the detectability of resonances was performed by Peter Fryer, working at the time for Rank Wharfedale in the UK, a manufacturer of both loudspeakers and headphones [2]. He used an electronic circuit to add a single resonance of known frequency, Q (sharpness) and relative level – also sometimes termed 'dilution' – to three different test signals: white noise, the opening bars of Brahms' first Piano Concerto and jazz vocalist Cleo Laine singing 'Peel Me A Grape'. Unidentified loudspeakers were used to reproduce the signals, and a large number of listeners participated in the experiment. The relative level at which a resonance became audible was determined for Qs of 1, 2.5, 5, 10, 25 and 50 at frequencies of 130Hz, 450Hz, 1kHz, 2kHz, 5kHz and 10kHz. White noise proved to be the most revealing test signal, with the results graphed below (although these were later modified slightly by Don Barlow [3]): 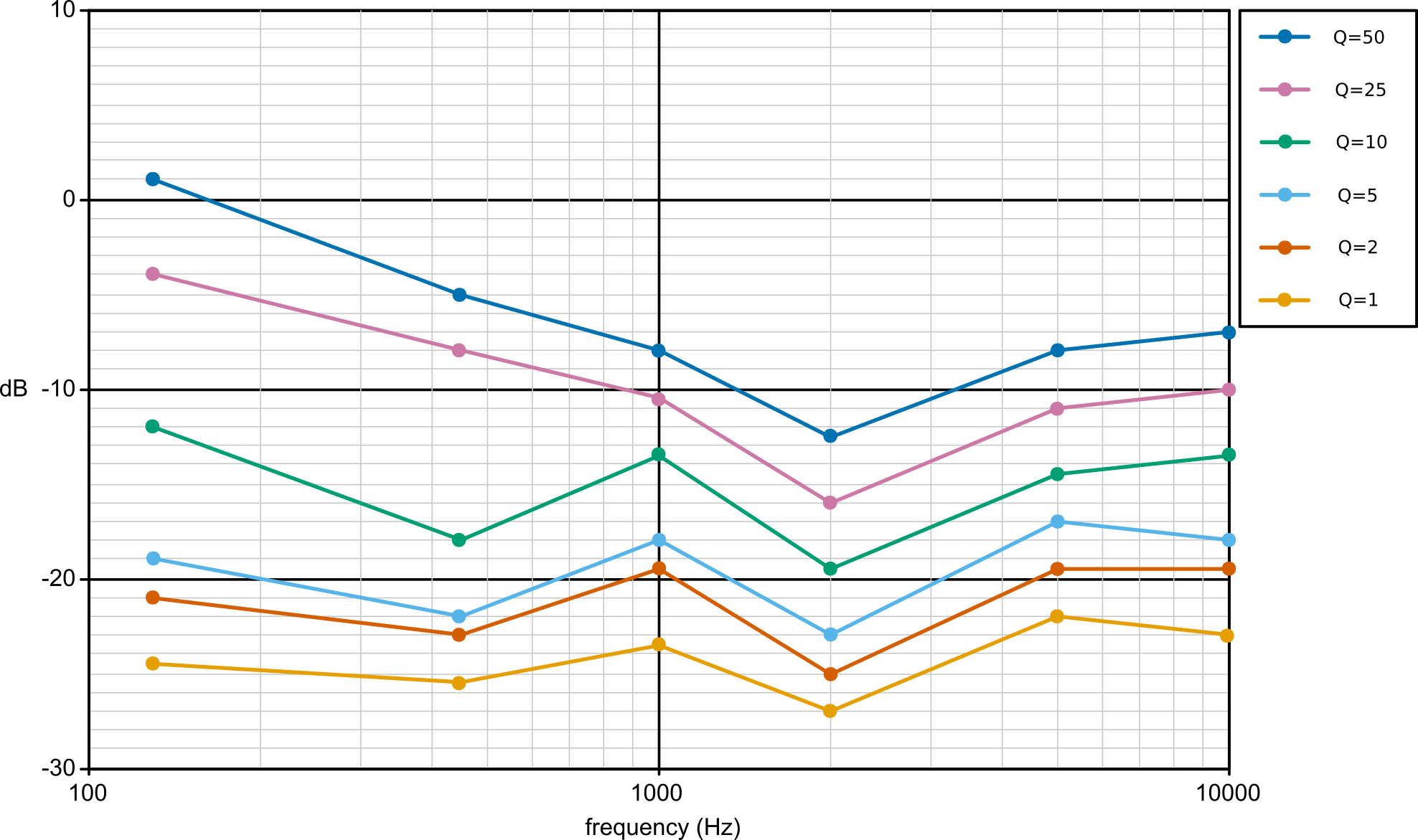 Fryer's results might serve as useful indicators of the potential audibility of individual headphone resonances, despite the likelihood that resonances in headphones are more easily detectable than equivalents in loudspeakers, and evidence that test signals with transient content are more sensitive to some resonances than is white noise [1]. But measuring a CSD is one thing; determining modal parameters from it – the frequency, Q and relative level of each mode – is something else. Moreover, some authors maintain that measuring CSD isn't the best way to go about this, and that time domain, rather then frequency domain methods – such as Prony analysis – are superior [4]. Software tools for performing such analyses, of either description, are not readily available. And even if we had the modal parameters for every resonance within a headphone across the audible frequency range, there might remain uncertainty as to which, if any, of the resonances are audible, alone or especially in combination.

I don't, as yet, have a solution to this problem. But it's clear that, until resonances can be characterised and their audibility predicted or determined in a reliable way, objective assessment of headphone performance is lacking an important facet.

REFERENCES
[1] S Uprichard and S Choisel, "The Influence of Acoustic Environment on the Threshold of Audibility of Loudspeaker Resonances", Audio Engineering Society 125th Convention, October 2008 (available here)
[2] P Fryer, "Intermodulation Distortion Listening Tests", Audio Engineering Society 50th Convention, March 1975 (available here)
[3] D A Barlow, "Loudspeaker coloration", Wireless World, March 1978
[4] I Mateljan, H Weber and A Doric, "Detection of Audible Resonances", 3rd Congress of the Alps Adria Acoustics Association, September 2007 (﻿download)
Footnote 1. I don't have Shaw's classic papers on the subject but from his graph of the ear canal and concha resonances, at 2.5kHz and 5.5kHz, their Qs appear to be approximately 2.5 and 2.2 respectively. These figures will, of course, vary somewhat between individuals.